I’m having a bit of self-doubt on whether WordPress was the correct place I chose to blog.

Now…ugh oh my god I can’t get over starting all my sentences with ‘now’. Anyway, I’m coming to a point where I’m considering moving from my long-time blogging platform, WordPress, to Tumblr. 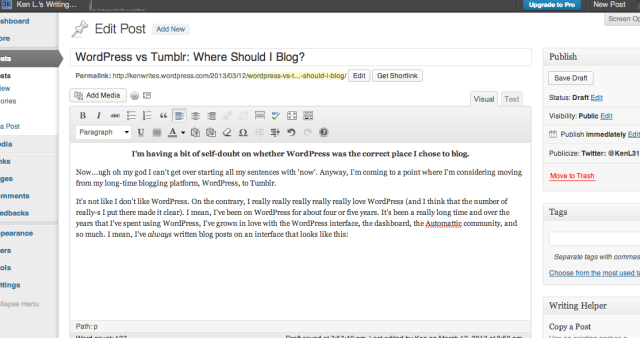 And so, just because I really love WordPress, there’s a reason why I wouldn’t want to switch to Tumblr.

The service is most popular with the teen and college-aged user segments with half of Tumblr’s visitor base being under the age of 25.

So as you can see, Tumblr is more popular with teens, and somehow that makes me think that I’d find it easier to connect and promote my blog on Tumblr. After all, Tumblr works more as a social network.  Tumblr also has a large amount of themes and a lot of the themes look really good. I have a blog on Tumblr (made years ago but inactive) and it looks like this:

However, if publicity is the only thing I’m going for with Tumblr, I’m not sure if it’d be a wise decision. As much as I’d like to connect with more people, I also want full control over the blog: Tumblr just doesn’t have that sort of advanced settings on WordPress (which I certainly would miss if I moved over). Also, from what I know most Tumblr blogs are image-based. But I’m a WRITER. My work is NOT image based. 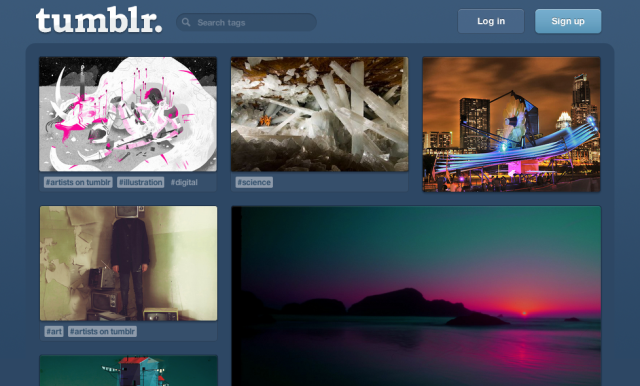 I’m really not sure about this right now. So what do you think? Please help by commenting with your ideas, and thanks for reading.