I’m just back from a trip to the buzzing metropolis of Hong Kong!

It’s not my first trip to Hong Kong- but since my first trips were when I was young, innocent and unable to remember much- this is kinda like a first trip. Hong Kong is an ex-British colony, made up of the Kowloon area (on the mainland) and the island of Hong Kong (along with other smaller islands). It’s a busy, crowded metropolis- and it had a lot to offer.

My first stop at Hong Kong was the Hong Kong Museum of History. It’s a large museum and it’s a look back into Hong Kong’s history from prehistoric times to imperial China to the British rule. I wasn’t too impressed with it, but I did like the area in the building that was a portrayal of Hong Kong’s streets during the British colonial era.

What is very interesting about Hong Kong’s history is its use of advertising music. The lyrics to the song goes like this:

The place for you

Somehow it manages to be catchy and simple at the same time. Great for a traveller’s anthem.

Alright, I guess that’s enough about old advertising songs. I then went up the Peak, which is a mountain that allows you a view of Hong Kong’s amazing skyline. Looking at cities at night really shows how far we’ve advanced from primitive cave-dwellers. I mean…would a stone-age man ever have imagined that one day his descendants would be living in brightly lit clutters of concrete and glass known as ‘cities’? Probably not. Anyway, the view of Hong Kong at night is beautiful. 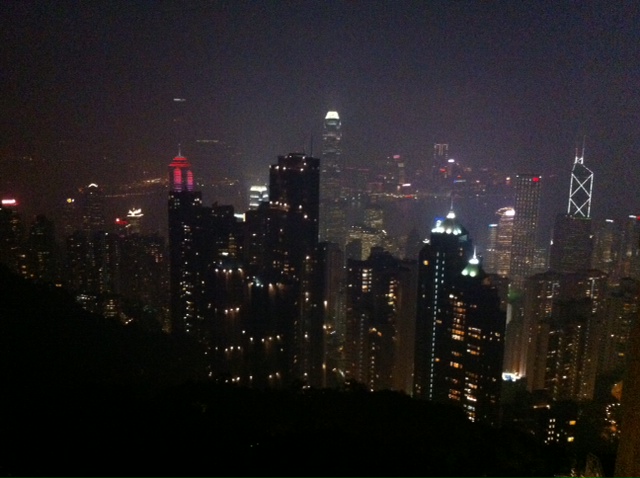 My next stop is the Chi Lin Nunnery. Its architecture is amazing- it doesn’t use any nails, but its wooden buildings are grand and really gives you a sense of calm. It reminds me of Meiji Shrine in Japan, but Chi Lin Nunnery is smaller. There are many beautiful golden Buddhist statues. It’s a really peaceful place and if you visit Hong Kong I’d recommend coming to this place. The gardens are also pretty, but I didn’t have much time to walk around in the gardens. 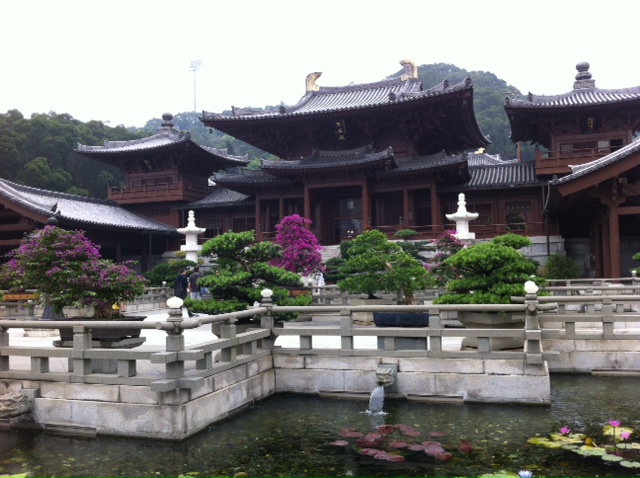 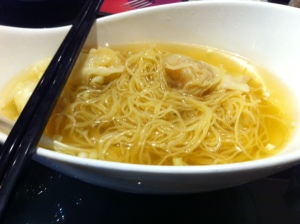 I’d like to take a short break here to talk about Cantonese food. The amazing thing about Hong Kong is that you can basically pick

Back to my traveling- my next stop was the Wong Tai Sin temple. To me this was really just an ordinary Chinese-style temple, but there were lots of people. Somehow I feel like a lot of the people there were speaking in Mandarin, which just shows how many mainland Chinese tourists Hong Kong is getting. As a side note- while I can speak some Mandarin, Cantonese is a completely different dialect that is incomprehensible to me. Anyway… (I keep getting sidetracked) the Wong Tai Sin temple is also known for being rather accurate in making predictions to the future, hence the large amount of people using magical sticks to try to find out the temple’s divinations for them.

I then went off to Lantau island to visit Po Lin Monastery. I’m not sure if this was local development or evidence of the legacy of the British colonial rule, but Hong Kong’s public transportation infrastructure is rather good. Many areas are accessible through underground subways, and to get to Lantau Island, you can choose to sit in a subway train that then arrives at a cable car station. Although I’ve just found out that there were accidents that happened with the Hong Kong cable cars (this one known as the Ngong Ping 360), it was actually pretty cool sitting in a cable car going through tons of fog. (The weather was mostly rainy). You really couldn’t see much. This was a problem when I arrived at Ngong Ping, however, because the fog in the highlands means I can’t see anything. You’re supposed to be able to see the giant Buddha statue of Po Lin Monastery from the cable car, but there was nothing but fog, and really, when you’re on land, you can’t see much farther than about ten meters away from you. It was a bit funny, because suddenly Chinese temple entrances or buildings would appear in front of you without warning. You had to walk up about 250 steps to see the Buddha statue, and I was nearly close to finishing the walk before I even saw the statue appear in front.

The last thing of note that I did was going to see the Hong Kong ‘Symphony of Light’, which is a light-sound performance done on the buildings of Hong Kong, seen from the nicely-named ‘Avenue of the Stars’. To  be honest, the performance was a disappointment, but I did get a very nice view of Hong Kong at night.

Just a short note before finishing off that walking is still an extremely popular means of traveling in Hong Kong. And it’s not a bad way, because as a tourist you do get to see a lot of local life. I guess I’d like to be able to walk more in Bangkok, but the heat just makes you exhausted after walking for about ten minutes in the streets, taking in lovely car smoke. Here’s a last picture of Hong Kong’s streets before we finish: 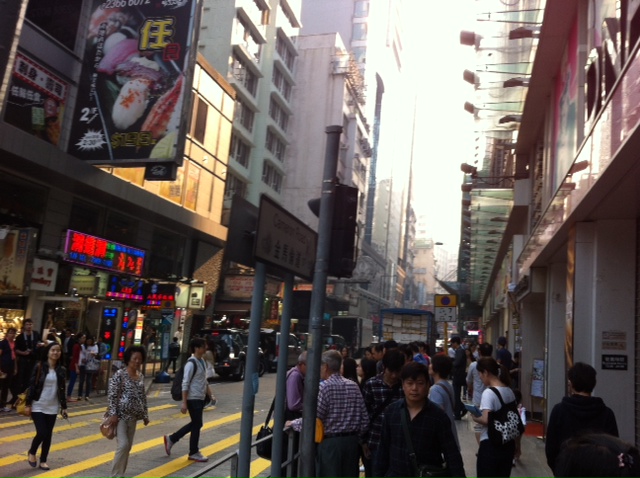 Overall, I had an awesome trip. Thanks for reading, and don’t forget to check back soon for the first chapters of my novels and other posts!