The antigovernment protests in Thailand are massive, by any standard. It’s hard to find a protest in any other country that would equal Thailand’s current round of protests in terms of numbers. The car-filled streets of Bangkok are a distant dream, because on a protest day, they’d be swelled with protesters , blowing their whistles and clapping plastic hands. On a stage would stand a protester whose job it was to yell all day about the government. “Victory awaits us”, they’d often say. “We’re nearly there!”

Go out of the protest zones, however, and a bit of a reality check is given. The streets would be lined with election banners from the Pheu Thai Party and some affiliates, a clear sign that they’re still determined to win a snap election and remain the rulers of the country. It’s a funny saying among the protesters that the government most insistent on clinging to power requires the largest crowds with the most endurance to kick them out.

A couple of months back I wrote a post here about Thailand’s recent political history, tracing the rise of Thaksin Shinawatra and the root of the current protests, the Amnesty Bill. If you don’t know much about Thai politics, then I’d suggest you read it first. But in short- the Amnesty Bill, which would have granted amnesty to convicted criminal and ex-premier Thaksin sparked the current round of mass protests. Discontent with the ‘Thaksin regime’- a word used to describe governments affiliated with Thaksin- has been brewing ever since the days of Thaksin’s own premiership, but never has protests managed to be so large. The Amnesty Bill was truly a last straw for many people.

Suthep Thaugsuban, a politician of the opposition Democrat Party seized the chance and resigned from his political positions to lead the mass protests. Although himself a very controversial person, he managed to gather the masses and rallied them together for protest after protest, eventually forcing Yingluck Shinawatra to yield and shelve the Amnesty Bill. He decided not to stop there, however; the protest evolved to become an antigovernment protest with the agenda of removing the government completely. A mass rally at Government House prompted Yingluck to dissolve Parliament and call for new elections, but the protesters refused to stop there, requesting for the caretaker government to step down and pave the way for an unelected ‘People’s Council’, which would rule Thailand for a period of time to implement reforms before returning power to the people and calling for new elections. ‘Reform before elections’: this became the slogan of the People’s Democratic Reform Committee, the main group of protesters with Suthep as its self-appointed secretary-general.

I’ve heard the Thaksin regime described as a ‘democratic dictatorship’- two words that barely go together, a huge oxymoron. But they are accurate. Thaksin derives his power from his ability to win at the ballot box, from where he also claims his legitimacy as a government. However, the tactics that he uses to win those votes are completely undemocratic. Buying votes off the less wealthy populace of the North and Northeast is one. Using populist policies to lure in voters is another. This is a key point. Thaksin’s populist policies are destructive, whether they be the rice buying

scheme, which caused huge damage to the Thai economy, or promising ‘one tablet PC per child’, or ridiculous car policies. Not only are these ruinous for the economy, they also create a lazy attitude in the people. A lack of education in the North and Northeast is a cause for why people often fall for these lures. Thaksin also has a network of connections throughout the regions, where he can simply ask for the support of local leaders- who in turn can pressure people to vote for Thaksin. Thailand’s cultural context which emphasizes respect for elders and local leaders can be exploited easily.

Hardly a democratic way to get yourself in power. Cambodia’s de facto dictator Hun Sen wins elections time after time. I don’t see a lot of people running out to say that he’s democratic. The same should apply to Thaksin.

Next, the government has no respect for the checks and balances on its power. The judiciary should serve as a check towards the government, but the government decided to reject a ruling of the Constitutional Court on its policies on the makeup of the Thai Senate (which should in itself be another check and balance). How do you REJECT the ruling of the Court? That’s akin to saying that you reject the law. How can a government continue to claim to be legitimate when it does not accept the legitimacy of the law?

Thus Thailand can actually be perceived to currently be in a political vacuum: with the government having lost its 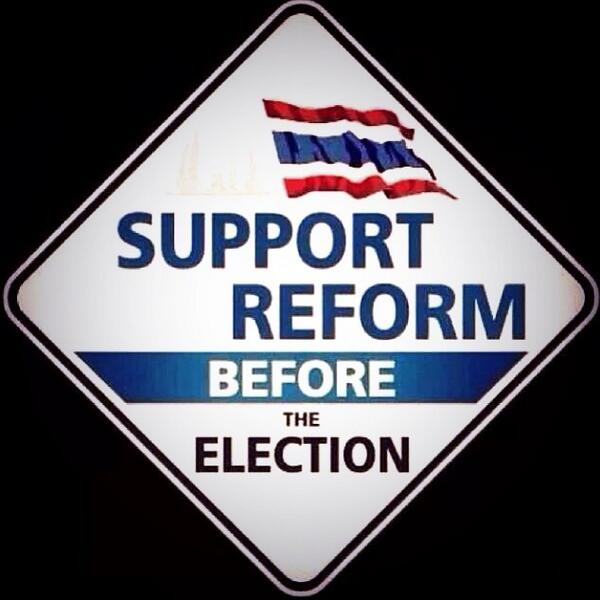 legitimacy since its rejection of the Constitutional Court’s ruling. Under the constitution, it is legal for an unelected Prime Minister to be royally endorsed in the case of a political vacuum or a crisis.

The protesters argue, and I argue, that this is such a crisis that would allow for the appointment of such a Prime Minister.

Thai democracy in its current form is not functioning in a democratic manner. A new election would only be followed by a repetition of Thaksin’s undemocratic tactics, which would lead to the reappointment of his sister Yingluck as Prime Minister.

The current Yingluck government is completely incompetent and corrupted. The rice buyback scheme caused Thailand to fall off its place as No. 1 in terms of rice exports; a lot of rice is currently lying in the Commerce Ministry, rotting as the government tries to find money to pay back to the farmers. (The rice is simply going to have to be priced so highly as to be completely uncompetitive because of the policy). Public companies were sold and became private companies- really serving the people there. The government also tried to borrow 2 trillion Baht- an amount equal to 50 years’ worth of the Thai GDP- for unclear purposes. To add to that long list, they amended laws that allows the government to secretly make deals with any other country (eg. regarding resources) thus meaning that the government no longer has to be answerable to the public.

In short, the Thaksin regime is turning Thailand into a mess. Allowing the government to continue in power would spell disaster for Thailand.

Progressing with the election now would in fact be a huge waste of public funds. A number of areas do not even have MPs standing for election, and some has only one candidate: even if Parliament manages to be formed, the fact that it wouldn’t have enough members to even vote for a new Prime Minister would render it useless.

Therefore, the PDRC and protesters call for a period or reform before new elections. I don’t believe that it’s necessary to sugarcoat the reforms: practically, it’s to rid the country of the influence of Thaksin and his cronies. That, I think, is good enough a goal.

This sort of protest is bound to be extremely controversial, certainly in the eyes of the international media. There’s no denying that. All other movements in other countries are usually ones requesting democracy; the one in Thailand requests an unelected government. This is a recipe for misunderstanding. I haven’t written about the protests up to this point after the Amnesty Bill, however, and I decided to do so today because of an article by Andrew MacGregor Marshall, an independent journalist who wrote an opinion piece for CNN. It is an example of such gross misunderstanding and bias that it almost screams for clarification.

First off, a lot of people describe the protests as a clash between the ‘Bangkok elite’ against the rural farmers of the

Northeast. That’s an inaccurate oversimplification. The protesters come from all walks of life, whether it be motorcycle drivers to literal billionaires. A walk through the protests would allow you to hear different accents of the Thai language that is certainly not the Central dialect spoken by Bangkokians. I’ve seen the protests myself. If the protests were so overwhelmingly made up of the elite and the middle class, there wouldn’t be the people sleeping on the floor at various intersections. The less wealthy also support the reforms. The situation isn’t as complex as a ‘class war’, as described by some.

The protests have also often been called an ‘anti-democracy movement’. An understandable misconception, as protesters are themselves demanding that elections be called off and an unelected government be put in place. The protesters are not against democracy, or elections, but are demanding REFORMS that will allow for a healthier democracy.

In the CNN piece I linked, Andrew Marshall ends with the sentence “…the prognosis for Thailand is depressingly bleak”. I’d certainly say otherwise. Thaksin has been in de facto power for over a decade: a tumultuous decade of instability and an unprecedented level of disunity in Thailand’s history.

To give credit to the Amnesty Bill, it was such an open attempt at personal gain that it managed to fire up Thailand’s silent opposition, something that no previous individual has managed to do. Suthep is now akin to an adored superstar, receiving cheers and monetary donations everywhere he marches, met with his fellow protesters wearing Suthep t-shirts and holding Suthep keychains. Suthep himself may have been controversial, but his proposed ‘People’s Council’ is an infinitely preferable alternative to the Thaksin regime. (You know there’s issues when people begin to think that an unelected government would be better than an ‘elected’ one).

The spirit and motivation of the protesters still remain high. Their chances of succeeding are at the same level. Previous coups and protests have failed to permanently remove Thaksin from power, and thus his reign of corruption continues. Currently they cling on to power, and their election posters a sign of their determination and confidence that Thailand will not be taken from their grasp anytime soon. That, in my opinion, is a  ‘depressingly bleak’ future for Thailand. But the prospect of finally removing this man who has brought so much trouble from the reins of the country points towards a much brighter future.

Have reforms before new elections; Thailand’s years of turmoil need not continue much longer.

13 responses to “Towards Reform: Thailand’s Protests”