It was rare enough to ever see General Prayuth wear something in public that was not his military uniform, and him in parliament was probably something never seen before. Only a few days later after his first address to the National Legislative Assembly, he would be nominated by that parliament as the 29th Prime Minister of Thailand- a much more regular-sounding title than ‘Chief of the National Council for Peace & Order’. The timeline that the NCPO had proposed earlier stated that the NLA-nominated interim PM will be in power for at least a year.

Back in 2006, a military coup d’état toppled the government of Thaksin Shinawatra. It was hailed by those against Thaksin as a great and admirable feat, but perspectives have changed significantly since then. The triumph against Thaksin was short-lived, and only a short while after the military gave up power was a Thaksin-backed party elected.

“Sia kong”, the Thais now call that coup- “a waste”. Not only did it fail to prevent the return of Thaksin, but it also failed to solve any of Thailand’s lingering political problems. Indeed, the political turmoil would continue to intensify. Eight years later, after innumerable rounds of protests, changes in government and points where Bangkok seemed close to becoming engulfed in civil war, the military would once again launch a coup, under General Prayuth Chan-ocha.

The people had, and still has, high hopes for General Prayuth and his newly established junta. Thailand has been plagued by political problems for what feels like an eternity; surely there must come a time where this cycle of corruption, protests and division will come to an end? Surely, reform and reconciliation is still possible? At a point where the political gridlock seemed to have reached a dead end, where the country simply had no way of moving forward, General Prayuth launched his coup. Many hailed him as a savior. A time of change was coming, they felt. The previous coup was a waste, for it failed to accomplish anything in the long term; will Prayuth, with his decisiveness, be able to pull Thailand out from its abyss?

At the core of people’s fears are that the coup d’état will end up as ‘sia kong’- a ‘waste’- like the 2006 coup. Of course, not all have this fear; there was no shortage of hysterical criticism from the supporters of Thaksin when both coups were launched, and the last thing they would want is for the coup to succeed in rooting out Thaksin’s influence. But for many others, who had been bitterly disappointed by how the 2006 coup turned out, their last hope seems to be with General Prayuth. General Sonthi, who had masterminded the coup that overthrew the original Thaksin government, would hand power over fairly quickly, allowing others to finish the job that he started. The result: a wasted coup. The interim government that had been set up in the aftermath of the coup was widely criticized later for being inefficient and, for the most part, simply not doing anything.

General Prayuth, however, has shown that he is taking a different course by choosing to don civilian clothes and participate in governing the country in the long term. With his nomination as interim Prime Minister by the NLA, and his acceptance of this position, he is fully committing himself to tackling the country’s problems for at least the next year.

As chief of the NCPO, General Prayuth has done a remarkably good job. All of the violence and chaos that was threatening to engulf Thailand and lead to a civil war was instantly halted, and the NCPO worked on solving a variety of problems in the short term, whether they be paying back the farmers the money they owed from the previous government, setting up centers for reconciliation, or even things as trivial as cleaning up the beaches of Phuket, both literally from the littering garbage and metaphorically from the various local influences and mafia. The junta moved with striking efficiency and speed, a stark contrast to the slow and agonizing procedures of the usual politicians.

These, however, are all quick fixes for the short term. The junta has not yet begun what many perceive will be the long term solution to Thailand’s deep rooted problems: national reform. A blanket term, this will have to encompass many things, which the NCPO had identified as covering politics, the bureaucracy, law and justice, local administration, education, the economy, energy, public health and improvement, mass communication and society.

General Prayuth may have proven that he can bring back law and order, but the largest and most difficult of all his tasks- national reform- has yet to begin. By becoming the Prime Minister, he has committed himself to overseeing this process. The general started shouldering on the huge burden since he launched the coup, and has since ruled with an iron fist. Yet even an iron fist can only do so much. Everyone’s wishes are now being relayed to him, and him only. Conciliate the various groups that seem to forever be in disagreement? Eliminate Thaksin’s influence? Crack down on the endemic corruption that plagues the bureaucracy? Reduce energy prices? Reform the educational system? Ensure that populism won’t ever be used to woo voters again? Thailand’s endless problems are deep-rooted- some of them have built up for years, even decades- and solving any of them will be an immensely difficult task.

The new Prime Minister probably knows that his work is only about to begin, and his work is not going to be easy. The number of problems are so diverse, and their severity so strong, that anyone would find themselves overwhelmed. The Nation writes about an interview with former PM Abhisit:

The ruling junta has done well in the first phase of its mission, but the road ahead will not be rosy…While the junta has managed well such emergencies as political violence and the unpaid money in the rice-pledging scheme, the real issues such as the national economy and problems of low prices for agricultural products are waiting.

At the very least, however, he will be able to work for longer and spend more time with these problems than the generals of 2006 did. The most important thing is to ensure that we will not need another coup. This one cannot be allowed to become ‘sia khong’, for Thailand has wasted too many years with the political turmoil. As we prepare to enter the ASEAN economic community, as our neighbors continue to develop, we can hardly afford to remain paralyzed by politics. 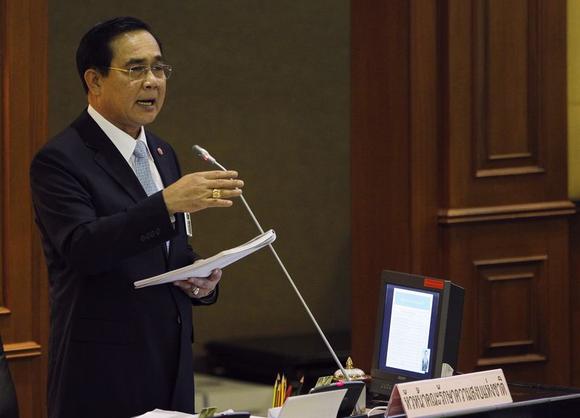 will come out of the efforts of the National Legislative Assembly and the National Reform Council, as spearheaded by the NCPO and General Prayuth’s upcoming government. After all, Thailand has had close to twenty coups, and still we have failed to work out the model of democracy that fits us and leads to good governance. However, General Prayuth’s work so far bodes well for his future success.The honeymoon period of 90% approval ratings may be over, but the facts still stand that the NCPO’s achievements are numerous and real.  If he continues to move with his characteristic decisiveness, implementing the reforms that are needed, then it may not be overly optimistic to place hope on General Prayuth.

Indeed, we can only hope that he is up to the task that he has put himself for.

There are also still those who argues of the junta and General Prayuth’s illegitimacy, for the lack of democratic governance. However, a question must also be raised: is democracy a means or an end in itself? Democracy is often thought of as the most free and preferable of political systems, but in the previous decade it has failed to produce good governance. If good governance is our goal, then we have not been reaching it through democracy. Suspending democracy for a limited time, even if that limited time reaches a year, under a strong leader who is willing to reform the system to eliminate the most corrupted elements of the previous government and create a true democracy in the long term, in addition to reforming the country and purging the various deep-rooted problems; this is worthwhile.

Indeed, General Prayuth has promised as much. The song ‘Returning Happiness to the People’, the lyrics of which was written by the general himself and regularly played on TV, has a chorus that says the following:

เราจะทำตามสัญญา / We shall keep our promise

ขอเวลาอีกไม่นาน / Let us have a little more time

เราจะทำอย่างซื่อตรง / We shall be honest and principled

ขอแค่เธอจงไว้ใจและศรัทธา / Please trust in us

As NCPO chief, General Prayuth has kept his promise; he has achieved peace and order. Now, as Prime Minister, we hope that he will continue to keep his promise to achieve successful national reform. The coup, hopefully, will not be wasted.