Hong Kong’s protesters are demanding full democracy, but they are fighting what is probably an impossible battle.

‘Abrasive’ was the word that British diplomats chose to describe Margaret Thatcher and Deng Xiaoping’s meeting in 1982 over Hong Kong’s status after 1997. When Thatcher tried to insist that the two sides pursue further diplomatic discussions about the issue of Hong Kong sovereignty, Deng exploded in anger. Declaring that to allow British rule in Hong Kong to continue would make him “no better than the traitors of the Qing Dynasty”, he announced that Britain would have to produce an agreement on Hong Kong that was acceptable to China. Of course, “the Chinese government would take into full consideration the territory’s special circumstances and adopt special policies in order to maintain the prosperity of Hong Kong”- and that was the greatest concession Deng was prepared to make.

The Iron Lady had to bend. She had met her match. After the meeting, an exhausted Thatcher would trip and fall down the stairs of the Great Hall of the People in Tiananmen Square.

In a way, the image of the British Prime Minister tumbling down and kneeling at Tiananmen was highly symbolic. Hong Kong may have once been a British colony, but this hardly mattered, for the territory was to be China’s. China alone would rule Hong Kong; and China, alone, would decide how it was to be governed. Yes, it would account for Hong Kong’s special status. That much was assured. But China could (and would) disregard other picky arguments; only what they thought was best for Hong Kong would be executed.

And China duly decided what it thought fit for its new special territory. ‘One Country, Two Systems’; this was the formula that Deng devised for the governance of Hong Kong and Macau. Although united under the PRC, Hong Kong’s unique system of governance would be guaranteed for the following fifty years. Later on, China would later guarantee “that the election of the fifth Chief Executive of the Hong Kong Special Administrative Region in the year 2017 may be implemented by the method of universal suffrage”. Hong Kong was to be, in essence, ‘democratic’.

The Communist Party would reveal later that democracy in Hong Kong was to have a particularly Chinese flavor, however. Certainly, the city citizen’s would be allowed to elect their own Chief Executive, but the candidates running in the election would have to be screened and approved first by the Communist Party. It was, to put it bluntly, a sham democracy.

The Battle for Democracy

today: the battle between opposing versions of democracy. The protesters demand a full democracy, one where candidates may freely run and campaign for Hong Kong’s best interests without the blessings of the central government. China, on the other hand, has no interest in seeing a future Hong Kong government that could be unwilling to toe the party line.

This is the reason why there are so many protesters, wielding umbrellas, clashing with policemen day and night. People pitching up tents in the streets, police firing tear gas at a crowd; one would expect these pictures from Ratchaprasong street in Bangkok, not from Mong Kok in Kowloon. Indeed, the images that have been coming out from Hong Kong were at first unfamiliar and, to many, surprising. Hong Kong is a city famous for its financial experts and businessmen, not for its ideologues. But this question of democracy is serious enough for many to feel sufficiently fired up to join what has now been dubbed the ‘Umbrella Revolution’. 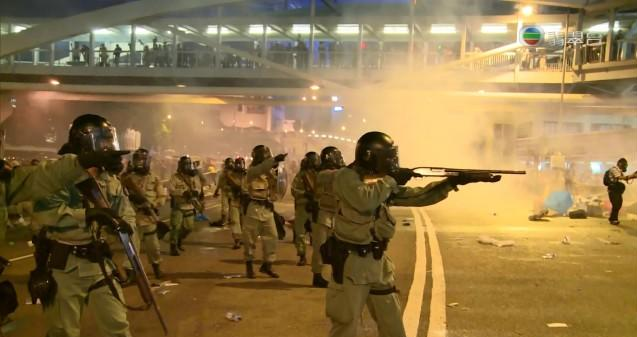 A promise is a promise, after all. The perspective of the protesters is more than understandable. They had believed China’s promise that Hong Kong will become democratic. China had not delivered; or, rather, they had not quite delivered what was promised. A fake democracy is hardly something that  many passionate Hong Kong citizens were willing to settle for. If we consider Hong Kong’s protests in this light, then we can fully justify Hong Kong’s protests. Their demands are fully legitimate; the protesters are simply asking for what has been promised.

But at this point, dragged into a state of empathy with the protesters, we probably need a reality check.

While Hong Kong has been embroiled in the past few years over the debate regarding its electoral process, China’s authoritarian leadership had also been busy with its own issues. President Xi Jinping, who came to power two years ago, has been building up his own power base. Many China observers now say that he is possibly the most powerful Chinese leader since Deng Xiaoping himself. This amount of power has permitted Xi to launch his signature anti-corruption campaign. Huge numbers of Communist party officials are under investigation, and some influential politicians who were previously thought untouchable had even been brought down. Xi is also determined to launch many reforms, such as those that would be designed at combating China’s slowing growth.

These reforms, however, will require the support of his party. Xi has made many enemies within the party from his anti-corruption campaign, and they are probably waiting. At this point Xi must be seen as a strong leader; what sort of message would backing down from the Hong Kong issue send? The new emperor simply cannot afford to back down. In addition, China is currently moving in the direction of stronger one-party rule under himself. What sort of example would a triumphant protest in Hong Kong set for the other mainland cities? A ‘Chinese Spring’ is the last thing that Xi would want to see.

Xi clearly remains a believer in the ‘One Country, Two Systems’ principle, in any case, even as it is being heavily shaken by the protests. Just a few weeks back, as protests were raging in Hong Kong’s Central district, he told Taiwan it should reunite with the mainland under this same principle. After all, reportedly, Xi once commented that the Soviet Union disintegrated “because no one had the balls to stand up for it”. He is not a fan of disunity, and is willing to stand up against it; this is clear enough. Take into account Hong Kong’s Basic Law (basically a mini-constitution) which states “Hong Kong is an inalienable part of China”, and we know Xi’s response to Hong Kong drifting further away from the central government.

It remains to be seen whether this ‘Umbrella Revolution’ would go down in history as a successful uprising against a broken promise, or a failed revolt. It has to be admitted that the odds are it will be the latter. China is not known for its tolerance of dissent, which was visibly demonstrated when the tanks rolled into Tiananmen Square in 1989, seven years after Thatcher tripped in that same square. Although it is also unlikely that Xi would send tanks into Hong Kong’s streets and start a massacre in the style of Tiananmen the way Deng did- the world is watching, after all – it is not unreasonable to expect that China would eventually increase the level of force if protests continue for much longer. Xi will not want to lose.

Of course, many will try to be optimistic for now, but it can be remembered that Margaret Thatcher was also optimistic before heading to China. Yet she was unable to force her way with Deng Xiaoping. So, the prospects of Hong Kong’s protesters reaching a different outcome with Xi Jinping?

Quite unlikely, it must be said.