Pope, Patriarch and the Forgotten Empire

Pope Francis made the headlines recently after meeting in Cuba with Patriarch Kirill, the 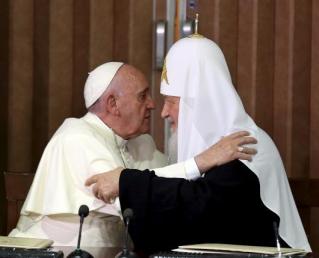 head of the Russian Orthodox church. It was the first such meeting in nearly a millennium, and even the Argentine pope could not contain his excitement as he exclaimed “Finally!” upon meeting his Russian counterpart. It was a historic meeting, and rumours that the only reason the patriarch was allowed to meet the pope was due to an order from Putin did not blunt the enthusiasm.

When people think of Christianity, people often only think of the Catholic and Protestant churches. Much is known about those two; the Catholics are led by the pope, while the Protestants broke away during the Reformation with Martin Luther. But what about the Eastern Orthodox church, where millions of Russians, Greeks and other eastern Europeans belong?

Of course, the fact that in recent history Orthodox Christian countries have been, to most intents and purposes, less prominent on the world stage than its Catholic or Protestant counterparts has led to general lack of awareness about the Orthodox church. But, in the end, I believe that the Eastern Orthodox church deserves just as much awareness. In the end, in my opinion, this all leads back to our general ignorance of the greatest forgotten Orthodox nation- the Byzantine empire, or to be more accurate, the Eastern Roman empire.

The Catholic and Orthodox churches broke apart in spectacular fashion during the Great Schism of 1054, where theological disputes eventually led to an Italian cardinal, after the death of a Roman pope, excommunicating the patriarch of Constantinople in the Byzantine capital itself; the patriarch then proceeded to gleefully excommunicate the cardinal. After that point, despite many attempts at rapprochement, the Catholic and Orthodox churches would never be truly reunited, and as the Byzantine empire fell into ever-greater ruin, most aspects of Byzantine culture would come to be ignored by the West and the rest of the world.

Many people, including Edward Gibbon, who wrote the famous multi-volume The History of the Decline and Fall of the Roman Empire, would argue that there is nothing wrong with ignoring most of Byzantine history; it was all a sequence of decay and decline that led nowhere. But this isn’t fair to the Byzantines, in my opinion and so I’d like to take some time in this post to argue that the Byzantine empire doesn’t deserve to be forgotten; rather, it deserves our attention.

Open most history textbooks, at least at high-school level, and you will find essentially the same thing: a couple of chapters dealing with the history of Rome from the founding of the mythical Roman kingdom to the Roman republic to the Roman empire. Treatment of the history of Rome will end at 476 A.D, the year Romulus Augustulus, who many historians consider to be the last Western Roman emperor, was overthrown and a barbarian king installed in his place. That year was the year the Roman empire ceased to exist, historians often say, and from then on it was all chaos and darkness in Europe. 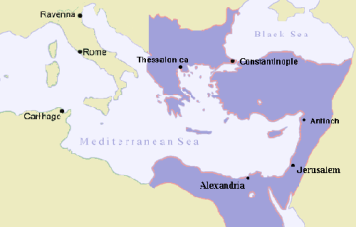 But then, a few sentences will be devoted to arguing the opposite; actually, the Roman empire didn’t fall in 476 A.D, but rather in 1453, nearly a thousand years later! This is because the Eastern Roman empire would continue to exist- and flourish- in the centuries to come, but this empire is now branded as the Byzantine empire, because its capital was at Constantinople, whose former name was Byzantium. And that is the most treatment that the Byzantine empire will receive in many history textbooks: as an afterthought.

It’s a little stunning to see how much care is given to dissect the first thousand years of the Roman empire and the statesmen it produced, and then lavish absolutely no time to the remaining thousand years after the fall of Rome. The boy emperor Romulus Augustulus who was overthrown by barbarian rebels is not, contrary to popular opinion, the last Roman emperor; that title goes to Constantine XI, a heroic monarch who died defending the walls of Constantinople from the invading Ottoman army.

Much more striking is the fact that we ignore Byzantine history in most history classes when we consider how much the Byzantine empire shaped the modern world.

The rise of Islam was, undoubtedly, one of the most important historical events in all time. What allowed that rise? The Byzantines and the Persians did. In the early 7th century, the Byzantines and Sassanid Persians fought an exhausting war, the story of which is surprisingly little known; emperor Heraclius, son of the governor of North Africa, sailed to Constantinople to depose a corrupt emperor and led the city through years of siege by the Persians. Eventually, the emperor led the Byzantine army into an invasion of the Sassanid empire and fought in the plains of Mesopotamia, toppling the Persian king of kings. The war left both sides exhausted and when the Muslims emerged from the Arabian desert late in Heraclius’ reign, the Persians were quickly swept away while the Byzantines lost half their territory. It was the Byzantine-Persian war that allowed Islam to rise.

Another important event was Byzantium’s role in the First Crusade and some of the crusades that succeeded in. Hemmed in by Muslim enemies and unable to raise enough capable troops to retake territory, the Byzantine Emperor Alexius Comnenus eventually appealed to the pope in Rome for help, and this eventually led to the First Crusade. It shows that Byzantium was at the centre of the clash of east and west during medieval times and failing to understand the Byzantine role will cause a huge part of the story to disappear when trying to understand the Crusades.

Most importantly, Byzantium played a huge role in preserving the legacy of classical civilisations. While Western Europe entered the so-called “dark age”, learning continued to flourish in Byzantium and eventually, as Byzantium declined, the emigration of Byzantine scholars to Italy and other Western European countries helped act as one of the many catalysts for the Renaissance. In addition, Constantinople, with its famous impregnable walls, acted as the first line of defence for Western Europe against Muslim armies, and if it were not for Constantinople, as some writers say, the Europe of today may very well be one of minarets and mosques. The Byzantines and Muslims battle continuously, with the Byzantines coming up with innovations such as Greek fire, a mysterious incendiary liquid that ignited in water, to keep the Islamic armies at bay. For better or for worse, Byzantium has helped create the modern world we know today.

Today, the word ‘byzantine’ is used to describe devious actions: intrigue, plotting, and bribing. Historical records show that Byzantine politics were morally neither worse nor better than politics in previous or later years. The problem with the dominant negative stereotypes of the Byzantine era is that it hides the rich contribution of the Byzantine Empire to the evolution of humanity…One of the most impressive achievements of Byzantium was its very survival during a period of 1123 years…With very limited military force, diplomacy was the key for the empire’s survival. Modern research on resilience, innovation, and adaptation could learn a lot from the Byzantine Empire’s historical experience.

What the Byzantines can teach about diplomacy; that is a topic that deserves a blog post all to itself. What was most striking, however, was how much the Byzantines actually used diplomacy; it was obvious that often war was the last resort for Byzantine rulers, who were keenly aware of how limited the military capability of the empire was especially during its later years. I find most interesting the history of Byzantine diplomacy during the last 200 years of its history. During that time, the Palaiologan dynasty ruled over a rump state that consisted of little more than the (by this time depopulated) city of Constantinople itself; they were almost entirely surrounded by the Ottomans. Yet in such a long period of time, the Byzantines managed to survive through cunning diplomacy alone.

Here is a link to the quoted page about Byzantine diplomacy if you are interested.

Consider the story of Justinian’s reconquests. Emperor Justinian the Great, keen to restore the entire Roman empire, embarked on a series of reconquests and managed to reconquer Italy, southern Spain and north Africa. Although an epidemic and wars in the east eventually caused Justinian to halt his wars in the west, and the regained territories did not last long after Justinian’s death, the story of how his generals managed to re-carve the Roman empire even for a short period of time is amazing.  Or take the story of the last Byzantine emperor himself, Constantine XI. A doomed emperor who had to defend Constantinople against the greatest Ottoman siege to that point, he nearly achieved victory and the city only fell on the last assault before the Ottoman sultan would have given up. There is more; Constantinople fell to the invading armies of the Fourth Crusade, but then it was regained by a triumphant emperor nearly a hundred years later.

And these are just tales of war; it does not take into account the- excuse the bad pun- byzantine palace coups and intrigues inside the court of Constantinople.

In the end, the Byzantine empire really merits a lot more attention than what most people would pay to it. Granted, it is not as “historically important” as, say, the Roman empire or the ancient Greeks, whose politics, wars and culture would shape the Western world for the millennia to come. But the Byzantines did play a fair share in the role of shaping the modern world.

Perhaps this post was a bit of a far link from where we started- the pope and the patriarch, meeting in  Cuba. But in the end, the Eastern Orthodox church was a big part of Byzantine history, and Byzantine history has been mostly ignored, hence the blanket lack of attention that Byzantine and Orthodox culture receives. The Byzantine empire truly deserves more attention and study.

If you’re interested in learning more about Byzantine history, then I would recommend starting with the 12 Byzantine Rulers series of podcasts by Lars Brownworth, who does an excellent job of condensing a thousand years of history into podcasts, each around 20 minutes. You could also follow the Twitter feed @CryForByzantium, who tweets a bit of Byzantine history every day; be wary however that the tweets are in chronological order and right now they’re already stuck in some very late Byzantine history.

On a more personal note to end this post, I used to write a blog called History Republic where I would write about little snippets of history. In the end, I got too busy to run that site and it’s not used anymore. However, after writing this post, I find that I really do miss writing about history, and so I think that in the future I’ll be writing more posts about events of the past alongside posts about the events of today.

2 responses to “Pope, Patriarch and the Forgotten Empire”