One week is all that remains from now and United Kingdom EU referendum. It has been a tedious campaigning season where debate has devolved into scaremongering and bickering; even Nigel Farage and Bob Geldof’s Battle of the Thames has only provied light relief.

The most interesting development so far is the fact that many polls are now putting the Leave campaign up in front of Remain. This is a remarkable turnaround since the start of the campaign, and it is surprising considering the general conservative nature of voters and how they often reject the unknown change and choose to remain with the status quo. It is helpful, of course, to constantly be reminded that any polling now should be taken with a grain of salt; ‘Out’ was leading in the final week in the Scottish Independence referendum, and barely any pollster predicted anything but a hung parliament during the 2015 general election. We do not know for sure how Britain will vote until June 23rd; anyone who says otherwise is misinformed or lying.

Even with just polling, however, I still find the turnaround in fortunes for Leave to be interesting. Prime Minister David Cameron has wheeled out every big gun he has to make the case to remain: Barack Obama, Angela Merkel, international organisations, respected economists, every living former prime minister (or if we look at George Osborne’s tweets, even dead prime ministers), Jeremy Corbyn, leaders of effectively all the minor parties bar UKIP. Yet Leave, with its token economists and Boris Johnson, is edging ahead. Why? 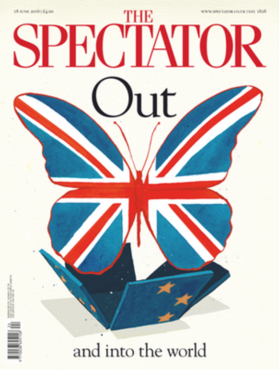 EU. Leave, on the other hand, has some seriously committed, enthusiastic campaigners. The blame is not with the Remain campaigners; after all, the EU is something that is extremely difficult to feel excited about.

The Spectator put out its case for leaving earlier today, and while the piece deserves a full read, here is a relevant passage from it:

Jean-Claude Juncker, the unelected president of the European Commission, sees intransigence as a great strength. His priority is the survival of the EU and the single currency: the welfare of Europeans and even the notion of democratic consent seem distant concerns. When he dismisses the ever-louder voices of protest as the shriek of ‘populism’, he echoes the Bertolt Brecht poem: ‘Would it not be easier… to dissolve the people/ and elect another?’ When Britain asked for reform, he took a gamble: that we were bluffing and would not dare vote to leave.

All this has placed the Prime Minister in an impossible position. Unable to make a positive case for staying in the EU, he instead tells us that Britain is trapped within it and that the penalties for leaving are too severe. His scare stories, peppered with made-up statistics, have served only to underline the emptiness of the case for remaining. It also represents a style of politics that many find repugnant. The warnings from the IMF and OECD and other acronyms have served only to reinforce the caricature of a globalised elite telling the governed what to think.

The key word is how Cameron is ‘unable to make a positive case for staying in the EU’. I do wonder what a truly positive case for remaining in the EU is. I would imagine it would go along the lines of: We are on an exciting course towards ever-closer union and further integration, where national boundaries will be erased,  national identities to be replaced by a pan-European identity. More and more power will be ceded from local parliaments to the unelected EU commission, headed by an EU president that no one elected. We will have less restrictions on movement of people and more regulations on trade- isn’t that wonderful! Oh, and don’t forget we get to keep our access to the single market and we won’t have to feel uncertain about what life outside might look like.

The problems are self-evident: you cannot erase identities and cultures built over the centuries and keep aiming for an ‘ever closer union’; even continental Europe has little appetite for that, let alone as fiercely nationalistic and proud a country as the UK. No one wants to see more sovereignty ceded to unelected foreign bureaucrats. Arguing for more restrictions on immigration does not automatically mean someone is racist and there are real reasons for why more immigration controls is a good idea. Defending a supranational entity as undemocratic, faceless and uninviting as the EU is not easy, and is not something that invites passion.

The economy, perhaps, is the only area where remain is strong, because it cannot be doubted that the uncertainties created by Brexit would be a hit on the British economy. Banging on about the economy, however, means defending the status quo and using fear to drive the debate. This is why so many has accused Downing Street of launching ‘Project Fear’: to scare people away from voting leave or believing that Brexit is a viable choice, rather than inspiring them about a future within the European Union. Psychologically this is problematic: for many, their heads, reminded of economic concerns, will be with remain, while their hearts, filled with visions of a rejuvenated Great Britain, are with leave.

And so we have the current awkward situation. David Cameron tried to renegotiate better deals with the EU- and by and large failed- and his best cards in the referendum campaign has been to try to convince people that Brexit is dangerous, rather than to try to argue for a positive case for remaining. Jeremy Corbyn, a lifelong eurosceptic, is unconvincing when he makes the case for remaining, and has tried in some speeches to turn the referendum into a question of support for the NHS, something that he is markedly more passionate about. Nicola Sturgeon’s case for remain boils down to ‘remain in the EU or say goodbyte to the Scotland’.

There are only eurosceptics, but hardly any true europhiles.

So far, it appears that the electorate may be rejecting this overdose of fear. All the warnings from party members, institutions, organisations, foreign leaders seem to no longer resonate. Of course, it must be noted that ‘Project Fear’ largely worked for the Scottish independence referendum. Whether or not it will work again for the EU referendum is an open question- and the future of Cameron’s premiership, of the UK, and  of the EU as an institution, lies in the balance.