“I will keep my promise and bring back the beauty of this land. Give me just a bit of time.” So sang the chorus of Gen Prayut Chan-ocha’s first ballad. “The greatness of Thailand will return shortly. Allow me to return happiness to the people.”  Indeed, it now seems to many like a lifetime ago when the prime minister’s signature song, ‘Returning Happiness to the People’, was playing seemingly everywhere, all the time, on every radio and TV station. In the three years since, the song has slowly faded away, and Prayut’s subsequent attempts at songwriting has not seen similar success. But it is probably a testament to the longevity of the Prayut government that the prime minister has had enough time to pen multiple pieces of music.

That longevity, however, should soon be coming to an end. Prayut has promised that the country would return to voting in elections in 2018, marking the end of a 4 year democratic interregnum since the 2014 coup. This would mean, ostensibly, that Prayut’s premiership would be terminated and an elected prime minister would return to run the country. 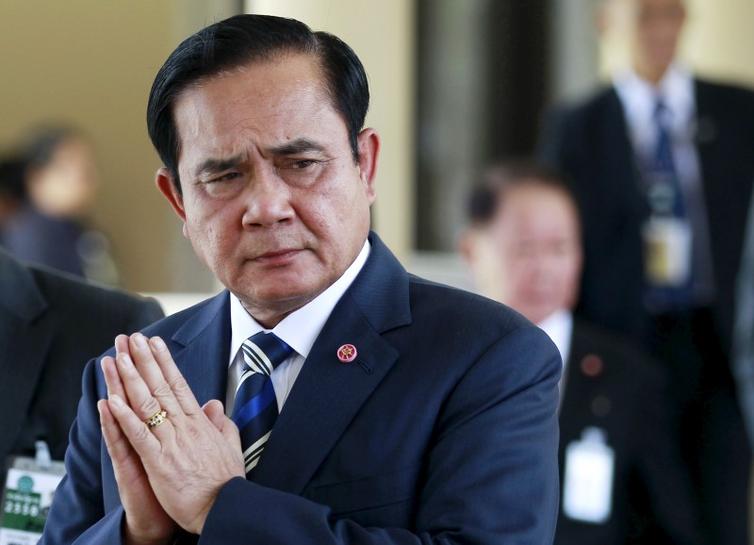 But recent developments have shown that this may not be the case. Prayut has refused to confirm or deny reports that he is considering running in the next election himself, and members of the Cabinet have sidestepped the issue by redirecting reporters to ask the prime minister what his plans for the future are. Suspicions have been further fanned by the increased frequency of Prayut’s visits to provincial electoral battlegrounds and the announcement that such trips will now be monthly. They include photo opportunities, such as a recent one showing Prayut riding a tractor through a rice paddy in Supanburi. For an American politician, this would be akin to a senator loudly denying presidential ambitions while wading through the cornfields of Iowa.

Predictably, the prospect of Prayut continuing his hold on power has stirred immediate criticism. Did the prime minister not promise, in his song, that he only needed a little bit more time to return happiness to the people? Is it acceptable for an unelected general to continue to lead this country? I have to admit that back in 2014, when I first began contemplating how a Prayut administration would turn out, I did not expect that the prime minister would contemplate staying on after a return to democracy. Such a move, I felt, would have had terrible optics especially in the eyes of the international community.

Three years later, however, I think that the time has come to re-address this issue. I will do so by analysing two ‘possibilities’. First, what are the possibilities that can lead to Prayut’s attainment of power for another term? Are they realistic, and even more importantly, are they democratically acceptable? Secondly, what are the possibilities that are opened up by Prayut retaining the post of prime minister? Are they beneficial to Thailand?

The Possibility of Power

Is it possible for Gen Prayut to become prime minister again? It certainly is, but the route towards that happening is still unclear. What is certain is that Prayut cannot directly run in the next election. According to the new constitution, he had to resign the office of prime minister within 90 days of the new charter coming into effect, which was July 5. As such, barring an extraconstitutional provision that was made especially for Prayut, he will not be directly contesting the election.

What is more likely to happen is for Prayut to instead be elected as an ‘outsider’ prime minister by parliament. Under the new constitution, it is not necessary for the prime minister to be an elected MP. Instead, if the parliament is unable to choose a new prime minister, the House of Representatives and the Senate may choose any candidate for the post. In this event, the Senate, which is an appointed body under the new constitution, would be almost certain to back Prayut. This would still require him to gain the support of at least half of the 250-member lower house, however.

At this point in time, it is still difficult to know the makeup of the lower house, although previous elections can offer some clues. In 2011, the Pheu Thai party won a landslide with 265 seats, allowing Yingluck Shinawatra to easily be elected prime minister. As no seismic shift has occurred in the previous three years that would lead to a massively different result, it would be within expectations that Pheu Thai will be able to quite easily win the next election and be the largest party in parliament.

What is not clear, however, is whether or not Pheu Thai will be able to win a landslide. It is unlikely that the Democrats, with their lacklustre and unimaginative campaigning, will be able to gain enough seats to make a difference; the party is still deeply unpopular in the north and northeast, while the central and southern regions do not provide enough room for growth. (The subject of how the Democrats must be able to campaign more effectively and actually win elections is a subject worthy of a post to itself). Instead, smaller or newer parties may have better hopes of making inroads into the Pheu Thai heartland. Recently, a People’s Reform Party was set up by a friend of the prime minister to back Prayut during the general election. With a more folksy, connected demeanour, a party of this sort may be able to do what the Democrats proved repeatedly that they could not: gain some seats in Isaan. The key is to deprive Pheu Thai of the prerequisite parliamentary majority that it needs to outright control the lower house.

This means that it is definitely possible for Prayut to be elected prime minister by the House of Representatives. But will it be a viable path to power? In the past, Thai prime ministers were often appointed from the outside, but they were from eras of less media scrutiny and international observation. It is not technically undemocratic to be elected an outsider prime minister- after all, one must still gain the acceptance of parliament, a body that is democratically elected by the people. The question is instead one regarding public relations. If Prayut is to be elected prime minister by parliament, it must be through a transparent, legitimate process of consultation and it must also involve outside candidates other than just Prayut. This will mitigate the level of controversy that is provoked.

The Possibilities Opened Up

We’ve been able to establish that Prayut stands a decent chance of continuing as prime minister after the next election, what are the possibilities that a second Prayut premiership would open up? Will it actually be good for Thailand to have Prayut as prime minister for another four years?

Firstly, it’s important to recognise the flaws of the Prayut administration so far. There is no doubt that there is a democratic deficit, and one that is sustainable only under a military government. After a return to elections, restrictions on freedom of speech will have to be lifted, and it is unclear how much criticism the fiery general will be able to live with. This return to democratic freedom will also imperil one of Prayut’s main achievements: the re-imposing of the rule of law and stability after the chaos of 2013-2014. Will Prayut be able to deal with protests, for instance? Secondly, Prayut is not popular among supporters of Thaksin (after all, he did remove his sister from power) and his continued rule may be an impediment to reconciliation. Finally, Prayut’s economic record has not been stellar and Thailand’s growth rate still continues to lag behind other Asian nations: a shame given Thailand’s economic potential. Fin

The appeal of a second Prayut administration comes instead from being able to establish and deepen reforms for Thai democracy while continuing to develop a long-term plan for the nation. Thai governments have always suffered from acute myopia, but the problems that plague this country have its roots far deeper than any government could hope to solve within four years. These include the structural problems that keeps Thailand within the middle income trap. In response, the Prayut government has drafted long-term plans that include a 20 year national strategy and the Thailand 4.0 vision (described here). Both of these have been criticised and mocked in the media, but it’s also important to recognise how much Thailand needs a long-term strategy that goes beyond focusing on the next election. A vision such as Thailand 4.0 is necessary, but it is also ambitious and requires a government to be dedicated to it for far longer than four years in order to turn into reality.

Democratic reform and national reconciliation are also two goals that a second Prayut administration can work to promote. Much of the work needed on democratic reform was accomplished via the promulgation of a new constitution. However, the government must continue its mission of promoting an understanding of democracy among the general populace. And although it has been stated that Prayut is not popular, he is probably in a better position as a technically unpartisan figure to promote reconciliation than a Pheu Thai or Democratic figurehead. How this can be done is still, to me, unclear.

The aim for a second Prayut government would then be as follows: to govern from the centre as to be able to promote reconciliation, to tolerate the workings of a robust democracy (including free speech) while focusing on continuing to develop Thailand based on its long-term roadmap. This, of course, may sound like wishful thinking, and it is likely that Prayut would come up short were he to actually continue as prime minister.  Neither the Pheu Thai nor the Democrats, however, have inspired confidence in their levels of competence or integrity to succeed where Prayut may fail; in fact, I think that the prime minister would have a better chance than ordinary politicians of success. As such, it is very well possible that another four years of the Prayut government will be beneficial for Thailand.

Of course, at this point is still more likely than not that the next prime minister of Thailand will be Sudarat or Somchai Wongsawat (I cringe merely writing these words). It is still instructive, however, to contemplate the possibilities that might lead to Prayut retaining power, and the possibilities that such a path would open up. He needed time to “return happiness to the people”; perhaps he will gain more time than he thought he ever would.