What Next for Thailand? 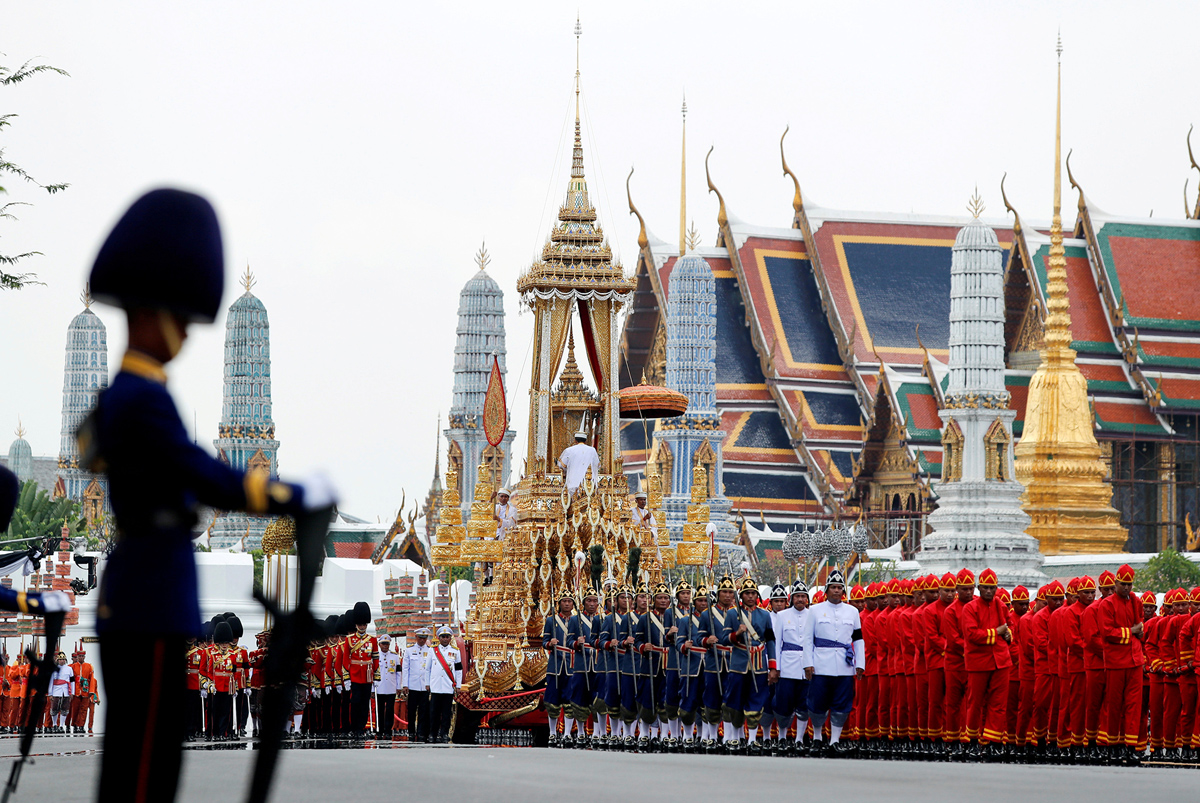 Millions watched as the Great Victory chariot, carrying the royal urn of King Bhumibol Adulyadej, was pulled through the streets of Bangkok towards the glittering royal crematorium. Troops marched in perfect unison to the tune of the late king’s musical compositions, along with members of the royal family and government. Hundreds of thousands of mourners sat along the sidewalks of the Grand Palace, paying their last respects.

The cremation of King Bhumibol presented an opportunity for Thailand to come together and unite as one in a way rarely seen in previous years. There was, predictably, a chorus of foreign critics who pointed out the price tag of $90 million. But, as Thai writer Win Lyowarin replied, that is a small price to pay for the unity of the Thai people; equally unquantifiable is this opportunity to display to the world the best of Thai culture. And, I would add, this was the sense of finality that was needed for the Thai people as they mourned the loss of the only king they have ever known. It was, in short, a spectacle fit for the occasion: the finale to a reign of seven decades. After seventy years, the curtains have truly come down on a historic era. The ninth reign is truly over.

But as the tenth reign begins in earnest, the Thai people must also look forward. And, inevitably, questions must be raised. If King Bhumibol was the father of the nation, what happens now that he is no longer here? What is the vision of Thailand for the 21st century? This week in the Bangkok Post, Thitinan Pongsudhirak wrote about the success of Thailand during the late king’s reign in engineering miraculous levels of economic growth and defending the country from communism. However, he says:

The 9th reign was so spectacularly successful in combatting communism and ushering in economic development that it almost became a victim of its own success, bringing about its own challenges. The sustained growth eventually emboldened previously marginalised voices to be heard through democratisation and political liberalisation. Most importantly, international circumstances changed, with no more communists to fight but instead with new international norms of democracy and human rights to adhere to.

Indeed, the changing world has led to a new level of political conflict, and his points are valid: the world has permanently changed, and there is no moving backwards in time. The nation has changed much between King Bhumibol’s ascension to the throne in 1946 and his passing away last year as a result of Thailand’s democratic development and economic growth. All of this has resulted in Thailand’s recent episodes of turmoil. Thais may have momentarily stood together as we said farewell to the late king, but what now? The last fifteen years has seen Thailand fall into greater levels of disunity as reds fought yellows and coups toppled prime ministers; the country has proved essentially ungovernable except through iron-fisted military rule, yet the desire to return to democracy is stronger than ever. So where are we headed from here? How do we take ourselves out of this vicious cycle? To answer this question, I’d look to use two levels of analysis: one for the short term and one for the long term.

In the short term, the Prayut administration needs to work towards re-democratising Thailand and preparing for the national elections. While I think that Prayut has done a respectable job of running the country, it must also be admitted that the rationale for his continued rule over the country is fading fast. Prayut came to power in the midst of the 2013-2014 political conflict to return peace and order to the country; this he has done. He has also overseen the process of the royal succession and executed the royal funeral and cremation perfectly, for which he deserves to be praised.

With the royal succession completed and no clear sign of domestic instability, however, his chorus of critics will only grow louder, and the repeated excuse his government has given to delay elections (the need to draft “organic laws”) will no longer suffice. Prayut has already run the country for four years, but a military dictatorship will not be sustainable in the long term. Instead, the government will need to come to terms with the reality that its time is up. Should Prayut feel that his work is still unfinished, he is more than welcome to run in the next election (as previously discussed here), but his continued rule will require democratic sanctioning as a means to derive legitimacy.

In addition, it is also time for the government to lift the ban on political activity. This was much needed to cool down Thai politics after the heated climaxes of 2014 in the aftermath of the attempted passage of the Amnesty Bill and the PDRC protests. It was also welcome in the year of mourning as Thais needed unity rather than political bickering. With the end of the mourning period, and the next election in sight, however, political parties need time to be able to prepare candidates, rebuild infrastructure and campaign to be able to compete effectively.

Longtime readers of this blog may notice that I have taken an unusually harsher tone on the Prayut government and military rule than I have in previous posts (I did, after all, defend the 2014 coup and have been generally approving of Prayut’s performance as prime minister). The reason for this is because I feel that what is best for Thai democracy going forward is not greater militarisation: it is greater democratisation and liberalisation. Reforms and a pause to electoral politics were needed in 2014, and only military rule could have provided the required stability during the royal succession. Now, however, there is simply no need for prolonged military rule; reforms to the country’s democracy, whether far enough or not, have already been completed and approved via the passing of the 2017 constitution, and the NCPO will still retain a degree of control over the country for an appropriate period of time after the next election to maintain peace and order. Otherwise, however, for Thai democracy to truly flourish, it must be allowed to stand on its own feet.

During the years following the next election, NCPO rule and the requirement that the Prayut administration’s long-term national strategy be followed will box in whichever elected government comes to power. This is not necessarily a bad thing; as I have argued in the past, Thai governments often suffer from acute myopia and a national vision will help Thailand develop in the long term, and a degree of military involvement in politics will prevent an immediate return to the kind of political chaos we have grown accustomed to in recent history. But the military cannot rule forever, and this brings us to the question of the long term: how can Thailand build a sustainable democracy that will ensure development in the 21st century?

First, Thailand needs to address the economic and political inequality that exists within the country. Let us start with the obvious divide: between the more affluent central and southern regions and the poorer north and northeast. It is easy- and I am guilty of this myself- to dismiss those who voted for Thaksin or Yingluck Shinawatra as being fooled by populist policies that do not focus on long-term national development, and I still think that this is an important issue that represents a flaw in how democracy works. However, we cannot overlook the legitimate grievances that Pheu Thai voters have, and they cannot be disenfranchised from the political system any longer. The days are gone when the poor can simply be ignored. The answer to this problem may require novel steps, such as greater decentralisation of power to the provinces, more inclusive models of economic growth and the provision of greater levels of education and opportunity in rural areas. This will require compromises between more conservative establishment forces and the emerging popular voice, but to ignore this problem will certainly lead to the return of yellow and red clashes that we so desperately need to leave behind.

Secondly, in the political sphere, democratic norms must be emboldened. Political parties need to be strengthened: right now, the only party capable of winning a national election is the Pheu Thai party; the Democrats are laughably bad at campaigning and no other parties even come close to having the ability to form a government. Both government and opposition parties will do well to look at how more advanced democracies conduct their politics and to emulate them, whether through the use of more sophisticated campaigning systems, the introduction of election debates or other hallmarks of strong, functioning democracies. The rule of law must be strengthened, and corruption needs to be handled far more seriously than it currently is. Thai democracy must be seen to work on its own: this is imperative to the establishment of democratic norms and the prevention of the constant oscillation between the constitutional and the extraconstitutional.

This, of course, is vague and abstract, but as it should be: we still have little idea of what Thai politics will look like after the reintroduction of democracy. But both economic and political development will be needed, and are ideals that must be aspired to if we hope to achieve true and lasting national reform and reconciliation that will not simply lead back to our coup-prone vicious cycle. As was written in the lyrics of a Thai song:

If we want to find a gift for father

Can all of us unite together as one?

Come together as a country for father to be happy

So he won’t have to work as hard for us like he always did.

With the end of King Bhumibol’s reign, Thailand must realise that the father of the nation is no longer with us. He has built strong foundations for the country, but the time has now come for us to build further on them. The Thai people must now stand on our own feet as we move forward in this changing world.