The Emperor Has No Clothes

Fire and Fury, the gossipy tell-all of the inner workings of the Trump administration, is not, objectively speaking, a good book. The writing feels like it could have used more editing. The logic is, at times, questionable. And above all, the details are difficult to verify, or easily provable as false (take the assertion that Donald Trump does not know former speaker John Boehner, for example, despite the fact that they have repeatedly golfed together). The means to which Wolff used to reach his ends- betraying off-the-record sources, for instance- are dubious. And It’s difficult to say that whether the fruit of this audacious attempt at access journalism was even an enjoyable read, as the book descended into tedious monotony: a constant drumming into your head that the president is incompetent, essentially illiterate, unable to process information, and prone to moments of irrationality. 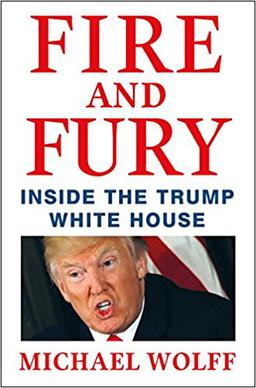 Then, again, the fact that the book becomes tedious is perhaps an appropriate reflection of political life in the United States in the past year: one of weariness and exhaustion at the constant tumult radiating out from 1600 Pennsylvania Avenue. And it may also feel that way because so much of what is written about in the book is what we already know. We already know that Trump does not read, for example, and that the White House is in an eternal state of conflict between its warring fiefdoms. We can tell from the president’s unscripted speeches that his thought processes are chaotic and that he constantly repeats himself. What makes Fire and Fury so fascinating is more the disturbing detail in which what we think we know are illustrated, and that sense of confirmation: of course Donald Trump is incompetent!

Needless to say, the deficiencies of Wolff’s work diminishes its credibility; while the work as a whole may ring true, but as CNN’s Jake Tapper tweeted, “ringing true is not a journalistic standard”. But we must also not underestimate the impact of this book. Journalists more credible than Wolff can help fact-check and corroborate its findings, as Axios has done. Jim VandeHei and Mike Allen writes that they can confirm many of the major conclusions we can draw from Fire and Fury:

Let’s forget, for the moment, all the other unverifiable claims that Fire and Fury makes. All the juicy details about how Sean Spicer’s mantra is “you can’t make this shit up”, or that Ivanka makes fun of her father’s hair, or that Trump has a trick he uses when he wants to pursue his friend’s’ wives. Focusing on just the details that other journalists can verify- that Trump cannot process information, finds it difficult to make decisions rationally, is largely ignorant when it comes to policy, and that this is well-recognised by his staff.

These details alone are damning. Indeed, as Wolff predicted, his book is forcing Americans to recognise that the emperor has no clothes.

What is unfortunate, in my view, is that while Fire and Fury has exposed in full view the dysfunction of the Trump White House, it will not lead to any concrete results. Democrats yearn for Trump’s removal from office, but until they control Congress, there will essentially be no way in which impeachment proceedings can happen. Others dream fervently for the invocation of the 25th amendment, but it is as clear as ever that Trump’s loyalists will not yet abandon the president.

In fact, it is the portraits of Trump’s aides in Wolff’s writing that are most startling. As Matthew d’Acona writes in The Guardian, “The milieu described by Wolff more closely resembles the court of a crazed medieval monarch than a traditional West Wing”. It is perhaps difficult to blame the demented president for his actions: after all, a crazy person most likely cannot be aware that what he is doing is crazy, and especially not Donald Trump, the most self-confident man in the world. The advisors, on the other hand, know exactly what they are doing, but yet they continue to protect this most dangerous occupier of the Oval Office in American history. The courtiers for a mad monarch may not be able to remove a king, possessor of the divine right, but that is not the case with president of the United States. Yet Trump’s court is too consumed by their own political ambitions, hunger for power and perhaps sheer cowardice to take action and confront reality: that they are enabling a man entirely unfit for his high office.

So, to conclude: is Fire and Fury a book worth reading? There are parts that are sloppy, to be sure. But ultimately, it is a clear illustration of one key fact: the emperor has no clothes. It’s unfortunate, indeed, that the Republican Party will have to shamelessly continue to deny what everyone in the world already knows.