Anniversaries tend to be happy. For Thailand and prime minister Prayut Chan-o-cha, whether this fourth anniversary is happy is debatable.

How did this all begin, four years ago? In 2014, as PDRC protesters demanded reform, boycotted a general election and shut down major parts of Bangkok, the country was in chaos. The prime minister, Yingluck Shinawatra, could barely run the country; the situation worsened when she was removed due to a corruption scandal and was replaced by an acting premier. Neither the PDRC nor the government were in a mood to compromise. Violence flared and bombings were frequent. The country was too divided to govern. There was no way out.

Then Prayut came along, posing as the unwilling hero who was the only one who could resolve this national crisis. First he proclaimed martial law- insisting that it wasn’t a coup d’état- and invited all involved parties to hash out a solution together. A few days later, when this failed, the general proclaimed that he was, indeed, launching a coup d’état. The Pheu Thai government was out. Prayut was in, and a few months later, he appointed himself prime minister.

With this recollection, it’s easy to remember why the military coup was necessary. It was the only solution to a vicious cycle of protests and counter-protests, and it brought much-needed peace and stability to what was otherwise an ungovernable country. It was stability that was brought about at gunpoint, but it was stability nonetheless. The weary country could find reason to thank Prayut for his attempt to “return happiness to the people”. His premiership, people believed, would be short; Prayut would reform the country’s politics, to prevent a return to the vicious cycle of the past, find a way to bring about reconciliation and then allow a return to democracy.

What no one expected, however, was that four years later, Prayut would still be here as prime minister, with a new election as elusive as ever. And, on this fourth anniversary, the initial love affair is largely over.

It’s important to note that there is much to thank the general for. Prayut has, as mentioned, presided over a period of much-needed stability; the restoration of law and order is something that in early 2014 could not have been taken for granted. His government oversaw the transition between the ninth and tenth reigns and a befitting royal cremation, which, as Professor Thitinan Pongsudhirak has noted in his Bangkok Post op-eds, was an achievement that was hugely important to the Thai people. The macro-economy has also picked up again, with the fastest economic growth in five years projected for 2018. Some of his government’s visions, such as Thailand 4.0, and economic campaigns, such as Pracharath, are inspiring and can produce more sustainable, forward-looking growth.

But in many other fronts, the prime minister has failed to fulfil his promises.

Most importantly, the deep political reforms that Prayut promised have simply not happened. Yes, a new constitution was drafted, but while the new constitution introduces new checks and balances, it has too many checks and not enough balances in favour of an elected governments. More importantly, other non-constitutional reforms have failed to materialise. Over a billion baht has been spent on the National Reform Council and the National Reform Steering Committee, but only six out of 110 bills that the two bodies have recommended has been promulgated into law. Dr. Bowornsak Uwanno, who now chairs the Law Reform Committee, has said that he feels exhausted because he sees no end to the reform process, with almost all the proposed reforms still in the planning stage.

The government has defended itself, saying that many reform plans, including Bowornsak’s, has only been launched late last year- but then what was the government doing in the three years prior? The government claims it has enough achievements to fill twenty notebooks- but what are they?

The failure of the government to allow meaningful reforms to take root will be the government’s biggest mistake. Thailand needs major reform in many areas, from greater decentralisation to educational policy to combating corruption. And while a dictatorship is ugly, it can allow things to get done faster; Prayut, after all, wields the all-powerful magical wand of Section 44. The government will say that reforms are naturally slow, but with its absolute power, is that really true? Thais often refer to the 2006 military coup as ‘sia kong‘- a waste. In this regard, Prayut’s coup has also become sia kong. 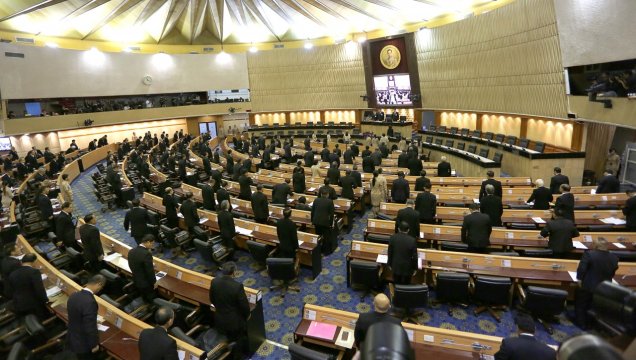 And while the lack of reforms is a major failure, the government has also found little success in two major other fronts. Corruption remains rampant- including at the highest levels of government- with the prime minister being reluctant to investigate even his own deputy. Thailand’s corruptions index remain at unacceptable levels. The government has not been able to reconciliate the country, with the peace being held only by threat of repression. Prayut has also failed to address the increasingly pressing issue of income inequality. The combined wealth of Thailand’s fifty richest billionaires have grown by one-third, but the rest of the country is hardly seeing gains. Even the supposedly cheery macro-economy is underperforming, by regional standards, with all our neighbours posting better economic gains.

I used to be willing to defend Prayut and his government, and I still believe that his achievements mean that Prayut’s administration was initially worth defending. But facts are facts. Four years is a long time, equal to the term of an elected government. It would be different if the government still has a raison d’être. But as it stands, Thailand has no reason to enter this fifth year of a military regime that has not delivered.

But will this fifth year be the final year? This is still unknown. Discontent with the government continues to rise, but Prayut seems intent on delaying elections as long as it will take for him to be sure that he can win them. The prime minister is busy enjoying the benefit of being the only politician allowed to campaign:touring the country, holding rallies, courting the support of local patronage groups and promising the very type of populist policies that he had vowed to eradicate in an effort to woo voters. In the meantime, Thailand continues on its path towards becoming a military-bureaucratic state that denigrates human rights and pretends to promote a Thai-style democracy which barely meets the standards of a modern liberal democracy. This should continue no longer. If Prayut wants to remain in power, he should call an election and plan to win it in a free and fair vote.

In 2006, the coupmakers instituted an unelected government that only lasted a year. The previous coup before that, in the early 1990s, also yielded only a short-term government. By contrast, with the current military regime, the show has gone on too long. The marriage has turned acrimonious, and this relationship needs to be called off. Thailand’s fourth anniversary of the current regime should be its last.

This article was also published in the International Policy Digest.

One response to “Thailand’s Uneasy Anniversary”