Getting the ACT Together

Suthep Thaugsuban has re-emerged from the political shadows to form a new party: the Ruampalang Prachachart Thai Party, also known as the Action Coalition for Thailand (ACT). Following weeks of being coy about his intentions, Suthep finally admitted that he was to be one of the co-founders of the new party, along with

The idea of forming a political party has been rejected by the firebrand in the past, as Suthep announced while leading the PDRC that he would not resume being a politician after the protests were over. Now, it is apparent that Suthep has changed his mind, although he maintains that he will not run for office and will not join the leadership of the party.

Little is yet known about the party’s plans, apart from the fact that it will contest the next general election. It is possible to analyse three main takeaways, however.

1. The two party system is over.

The announcement marks the emergence of what will most likely become a new major force in Thai politics. The past two decades in Thai politics has been characterised by what is essentially a two-party system, where successive incarnations of Thaksin’s parties (Thai Rak Thai/People’s Power/Pheu Thai) competed against the Democrat Party. The choice was always clear: red shirts who liked Thaksin’s policies voted for Pheu Thai, while Thaksin’s opponents voted for the Democrats.

Never before, however, has there truly been a viable third party that could have any chance of coming close to winning the elections. Third parties have always been regionally focused and had no means of winning an outright majority; instead, they relied on attaining power by forming coalitions with the larger parties.

This time around, two new parties are forming that are likely to have much more widespread appeal. One is the energetic billionaire Thanathorn Juangroongruangkit who has recently formed the Future Forward party to realise his liberal vision for Thailand. Thanathorn, however, still lacks a natural constituency; his would-be supporters would most likely already vote for Pheu Thai by default. 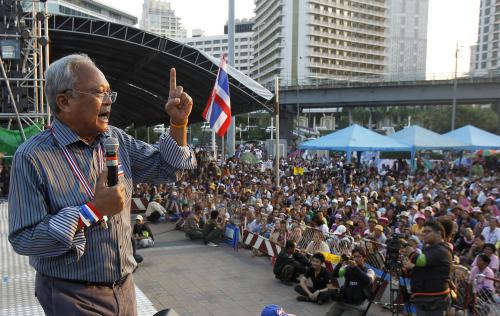 The same is not true for ACT. Suthep’s decision to publicly announce that he is a party co-founder is a major boost for the party, because of Suthep’s massive following. In a sense, his rock-star status is ironic; prior to 2013, his decades-long involvement in politics and position as deputy prime minister under Abhisit Vejjajiva meant that he was a household name, but he was always viewed as a Dick Cheney figure who had his own issues with corruption. Since leading the PDRC protests, however, Suthep is now affectionately known among the PDRC faithful as loong Suthep (uncle Suthep) or kamnan Suthep (village headman Suthep). PDRC protesters view him as a hero who marched on the streets of Bangkok day after day to tirelessly fight the Thaksin regime.

This means that party’s calls for the PDRC may prove highly effective. A member of the party has said that “We hope to appeal to millions of people who joined hands in resisting fraudulent power and protested for six months.” With Suthep in the party, it may not be difficult at all for the party to retrieve their supporters and turn them into a formidable voter base.

2. The party, for all intents and purposes, is a PDRC party.

Suthep justified his decision to return to politics and co-found the party by saying:

I have asked the founders about the ideology of this party, and the more I listened, the more I liked it. They told me that the ideology of this party will be based on the following principles: 1. To respect and defend the monarchy, 2. To create a “dharmmacracy” at every level, 3. To listen to the voice of the people and take into account their interests, and 4. To reform the country according to the will of the people, such as by reforming the political system, eradicating corruption, reforming the civil service, decentralisation, lowering income inequality through the economy, education and healthcare, and importantly, reforming the justice system, particularly through police reform. This matches what the great mass of the people want.

If this sounds familiar, that’s because it is. It clearly echoes many of Suthep’s speeches and stated goals during the PDRC protests. In particular is the call for reform; after all, the main objective of the PDRC was “reform before protests”. Ostensibly, reforms have already happened to a degree (albeit, according to people working for the junta, at a pace far too slow), but that does not mean that reform has to stop there. The party views reform as something that must continue in the future after elections are held.

As such, for all intents and purposes, ACT can be considered as the de facto reincarnation of the PDRC as a party. This transformation is significant. As a protest movement, the PDRC eschewed parliamentary politics in favour of massive demonstrations to make its voice heard. But protesters on the street cannot govern; only a political party can. It is good to see that in the future, ACT plans to carry forward the PDRC’s goals but within the framework of the democratic process so that it can have a more lasting impact on Thailand.

3. This leaves the status of both the Democrats and the junta unclear.

The biggest question that is raised by the formation of ACT is where this leaves the Thaksin opposition. ACT has stated that they will field candidates in all constituencies, which would clash directly with other anti-Thaksin parties.

The Democrats, in particular, are in a dilemma. It can be presumed that most PDRC supporters would have voted for the Democrats in previous elections and supported Abhisit as prime minister. A rift emerged between Abhisit and Suthep, however, where Abhisit preferred a constitutional, negotiated solution to the 2014 crisis and denounced the coup while Suthep cheered the military takeover. This has led some to voice greater frustration with the Democrats, such as after Abhisit’s denunciation of the new constitution and repeated criticism of prime minister Prayut, who is popular among certain segments of the anti-Thaksin camp. Others simply feel more loyalty to the leader of a protest movement Suthep rather than to the more aloof and distant Abhisit. Therefore, many will face an important question: do they vote for the Democrats or for ACT?

The answer to this question is important, but it may also turn out to be irrelevant. If ACT and the Democrats ended up gaining enough votes to win a majority together, they would most likely form a coalition. The issue is if the Democrats and ACT choose to field candidates in all constituencies in the upcoming election, they will most likely end up cannibalising each others’ voters, which would guarantee a Pheu Thai victory in the majority of constituencies and neither party would get to govern. The Democrats already have enough trouble winning elections; competition from ACT could prove to be a mortal challenge.

Finally, ACT has recently declined to immediately endorse Prayut to continue serving as prime minister, despite Suthep’s previous enthusiasm for a second Prayut premiership; some observers have noticed that Suthep’s approval has seemed to cool down recently. The prime minister’s most natural constituency are PDRC supporters and the anti-Thaksin camp, but backlash against his heavy hand, refusal to crack down on corruption and seeming inability to narrow inequality has alienated some former supporters. If ACT ends up nominating its own candidates for prime minister, where does that leave Prayut?

ACT is still new, and it is a long way yet until the next election. But this new party, along with Thanathorn’s Future Forward party, are worth watching as potential disruptors of the traditional political scene. Will Suthep get his ACT together? That remains to be seen.